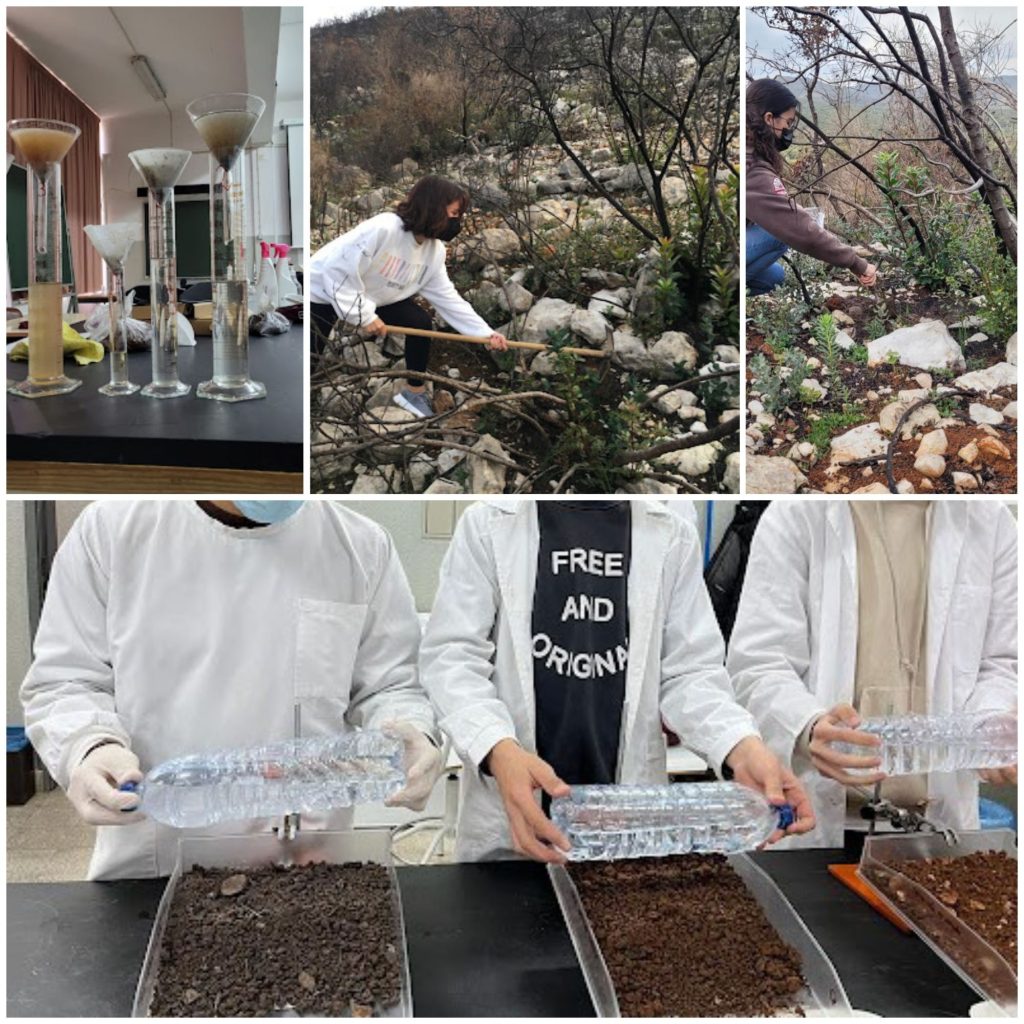 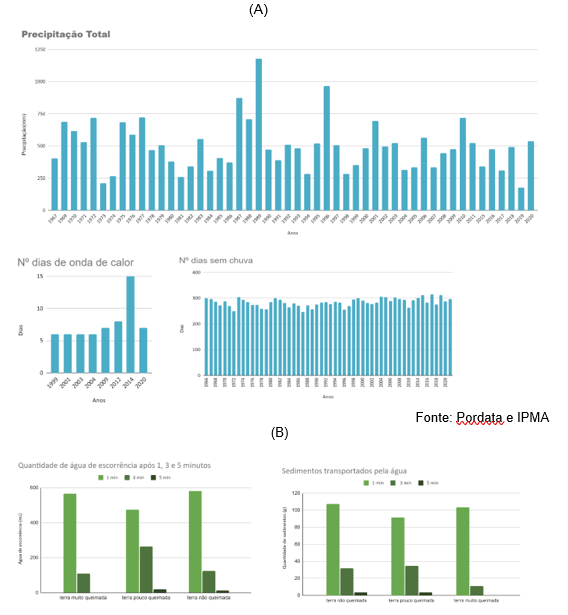 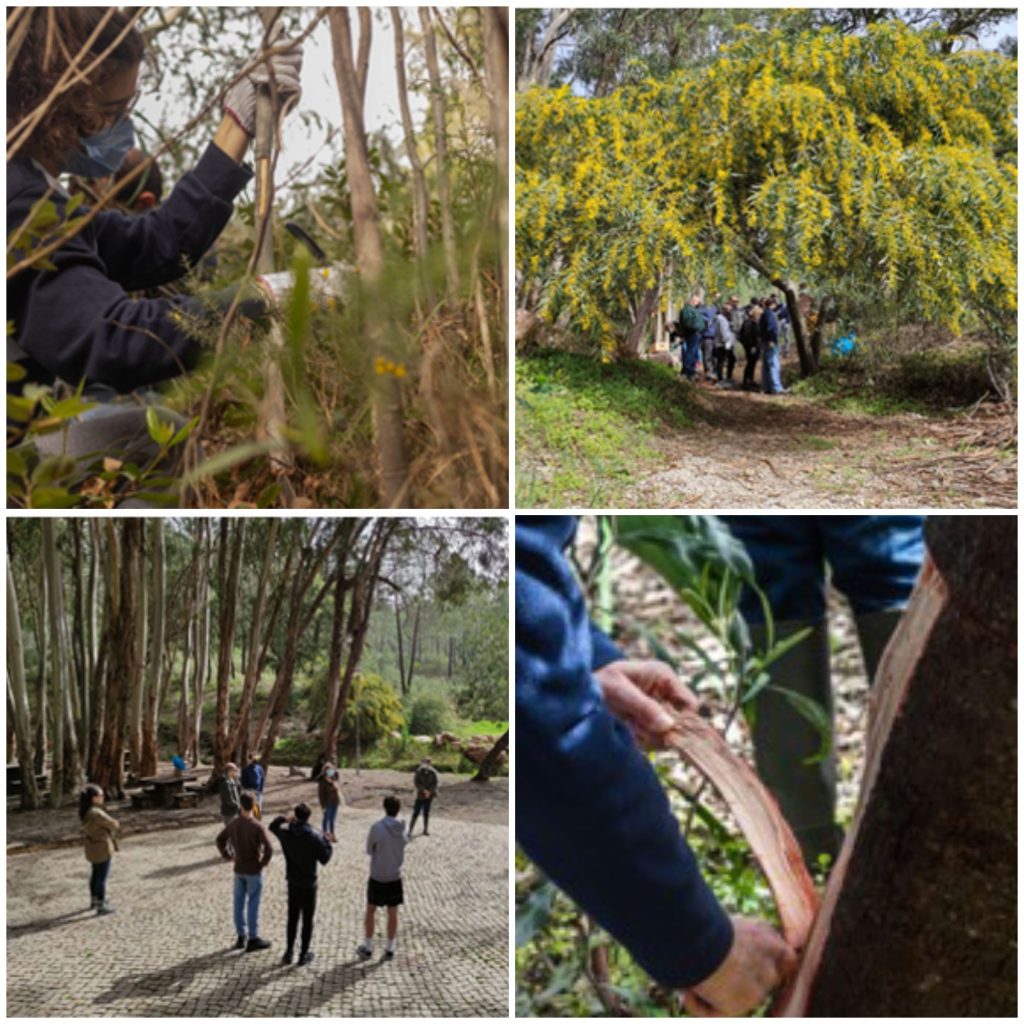 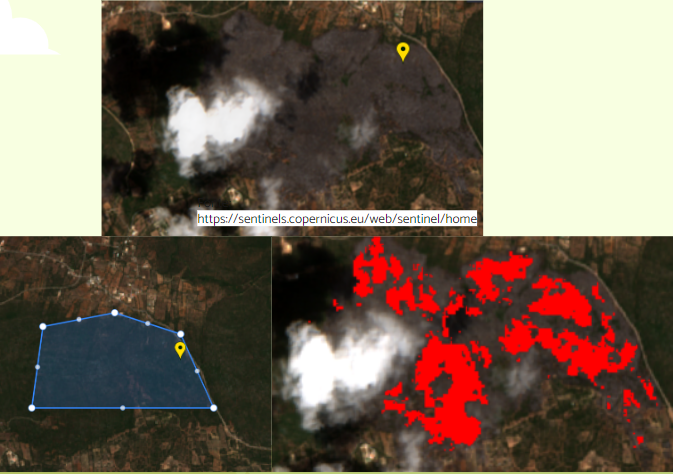 How do fires alter soils and influence natural ecosystems and agriculture in the Algarve?

Once fires are a big problem in Algarve, we thought we could develop a project where we could study their influence in the natural ecosystems in the agriculture of this region.
We decided to start looking up at Pordata and IPMA’s statistic data, in the way that we could establish the relation among the total precipitation, the number of days of heating waves and the number of fires in Algarve. Through sattelite images we determined the burned area of the 2012 big fire, that has affected our region. We have also contacted the fire department of São Brás de Alportel to understand which vegetable species were more resistant to fires and which of them were less resistant,, the ones that form natural barriers to the propagation of fires and those which dispersion is caused by fires, those which can regenerate more easily and also the effects of fires in the soil. We have also had a field study in an area that had suffered a big fire 20 years ago. This study was organized by the ICNF. In this action we collected recently scorched soil and also intact soil. After that, we did an experiment to find out the water retention and the dragging of sediments by water. We also contacted the investigators of invasive plants (like acacias) to better understand those plants and the correct way to eliminate them.
Lastly, we did informative and sensibilization activities about the studied problematic.

The lowest values of precipitation in Algarve were in 1973, 1994, 2004 and 2019 – year was immediately before the big fire of Monchique. Associated to a low precipitation we can see there is a relation with the high number of days without rain. In 2015 we have surpasses, for the first time, the barrier of 300 days without rain, in a year. The situations repeated in 2017 and 2019. From 2009 on, we can also verify that there was a raise in the number of days with heating waves. This way, we can conclude that, in the last years, the conditions for the occurence of fires have raised significantly.
In our investigation we also found out that herbaceous plants, bushes like the strawberry tree and trees like the pine tree, the acacias and eucalyptus are favourable to fires. On the contrary, the cork oak, a very typical plant from Algarve, can be a barrier to the propagation of fires. The soil is also affected by fires, turning less productive and dried, missing time to recover their properties. As it loses the vegetation protection, it is exposed to solar radiations and erosion, provoked by rain and wind.
In our experiment we haven’t confirmed that the most burned soils retained less water and the sediments were removed more easily by the action of water, as the not burned soil was very dry in consequence of the high number of days without rain.
Acacias are invasive plants that exist in the Algarve and can stay in the soil and keep active for decades. A month after the fire, we can see small plants, as the germination of these plants are stimulated by the fire. They are of rapid growth and have some competitive advantage in relation to the local vegetation. That is why it is important to eliminate them through appropriate methods. One of those methods is to remove its bark, through it we can eliminate the phloem and so the circulation of elaborated sap from the leaves to the roots is interrupted. This way they are going to die.
We concluded that fires influence the soil quality and fertility, and also alter the ecosystems. To solve this problem is important to control the propagation of invasive species and plant species that contribute to the detention of propagation of fires: cork oaks and plants with high capacity of regeneration, like strawberry trees.

As our intention was to alert the population for the consequences of fires and give some solutions to the problem, we performed 2 activities.
The first one was directed to primary school children and consisted in a dramatization of a story written by us. This story is about the consequences of human action responsible for the soil deflagration in forests. We also prepared a game to play with these children to teach them what to do to prevent a fire.
We also accomplished an action to control acacias (invasive plants, that help in the fire propagation) in “Fonte Ferrea”, in São Brás de Alportel. People of different ages participated in this action. This event was developed in partnership with “Quinta do Peral” and “Agência Portuguesa do Ambiente”. It consisted in an informative session about the damages these plants cause and teach how to, correctly, remove them. The activity ended with the peeling of acacia.