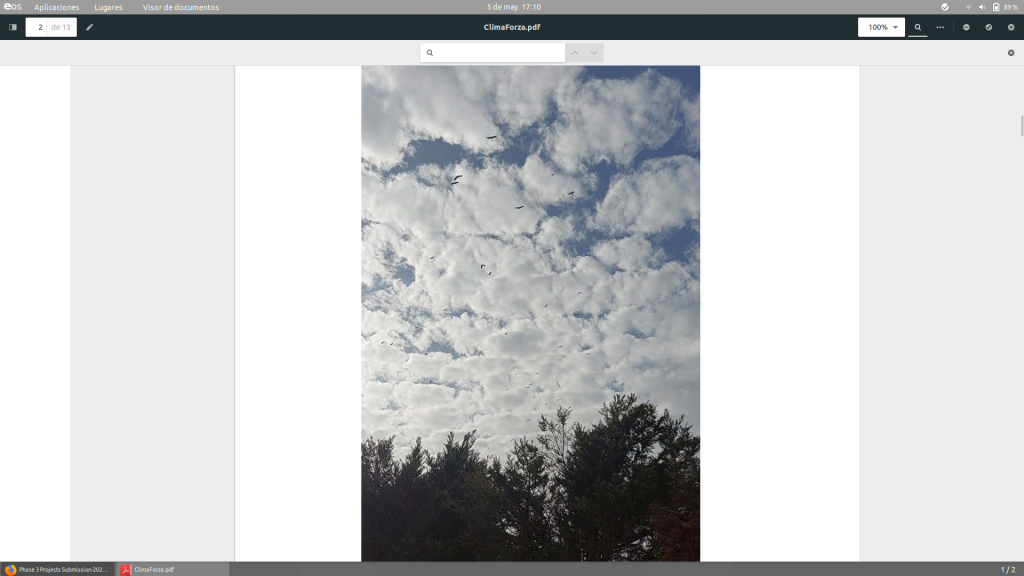 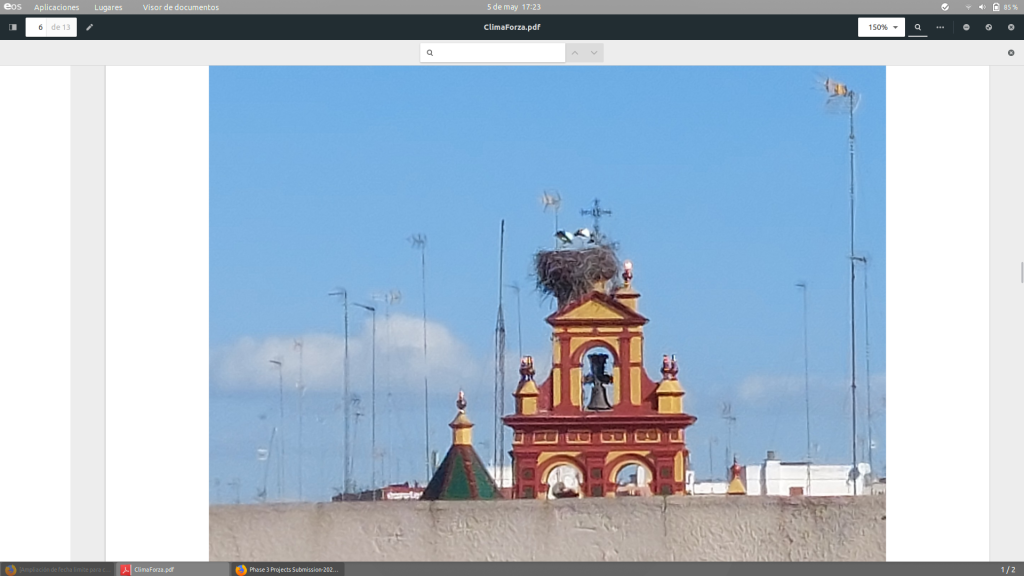 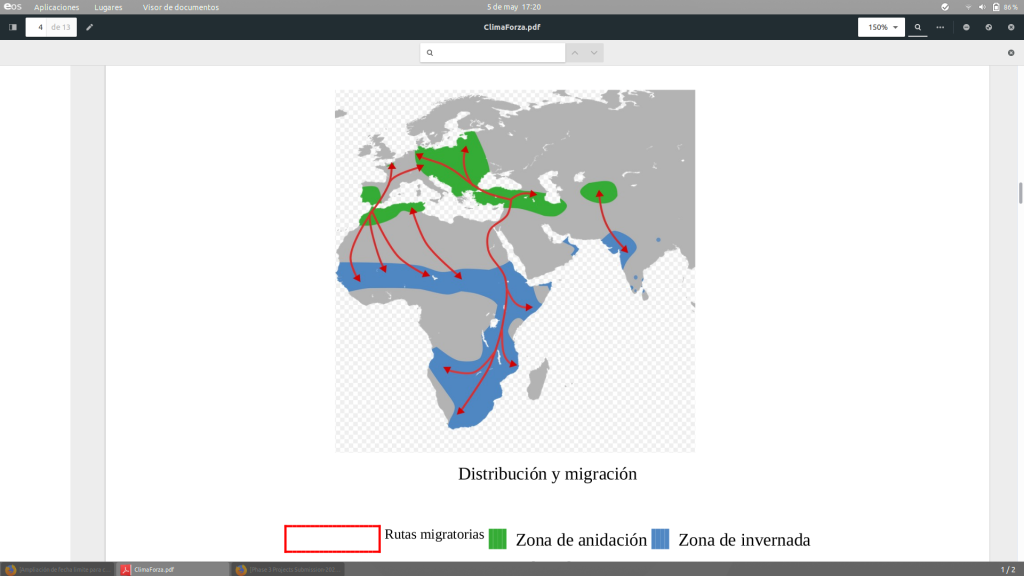 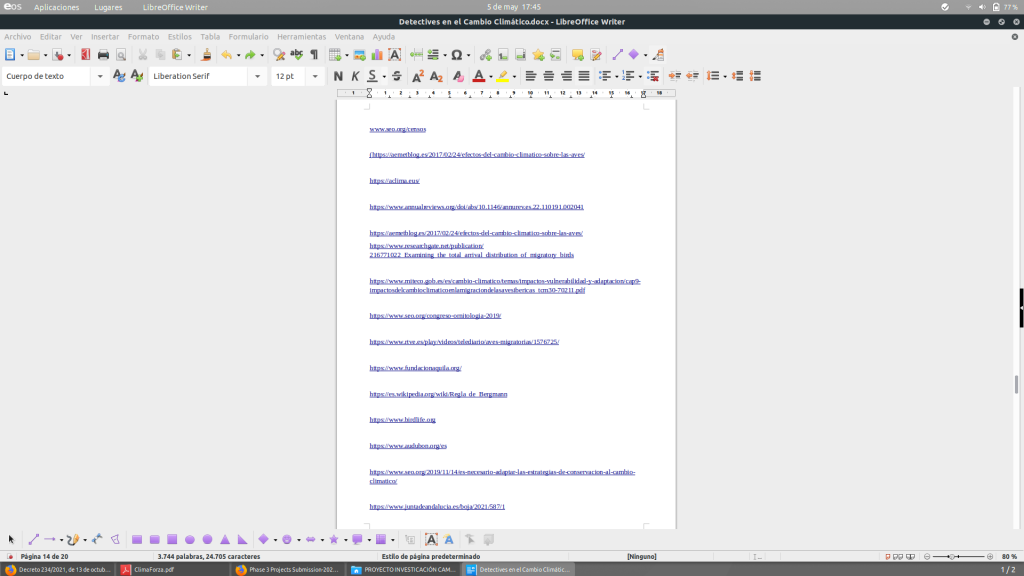 Could Climate Change be causing deaths in migratory birds and/or other animals?

The local climate problem/issue we have investigated has been “The descent of migratory birds in
our area”.
For this issue we have used the Earth observation data followings:
– Photographs taken on land.
– Birdwatcher’s notes on bird sightings.
– Monitoring biodiversity and wildlife trends.
As well as the opinion from the expert, Juan Antonio Delgado Sáez, and Climate Detectives
Webinar “Ask to a Scientist”.
For investigating the climate problem, access/collect data and analyse, we have observed different
species of birds (mainly storks), and the ones that usually exist in our town in the following annual
seasons (storks, wild ducks among others).
Obtaining information from the Department of Agriculture, Fisheries and Sustainable Development
of the Regional Government of Andalusia, through the Migres Foundation, which continuously
monitors the birds that use the Strait of Gibraltar in their migratory movements. In order to know
the fluctuations that may occur in the number of specimens of the different migratory species, and
to detect possible problems of conservation of these species and their habitats in the places of
origin, not only in Andalusia but throughout Europe.

Climate change can affect bird migration. Birds migration is affected.
Plastic can be found in the stomachs of birds, this is of course again related to the ocean pollution.
We can see White Stork (Ciconia ciconia) inmigrate from Africa to Alcalá de Guadaira, Seville,
Spain.
SEO/BirdLife seeks data to know new movements and wintering places of the species.
White storks always migrate over land masses in order to take advantage of thermal currents and
avoid the sea, where they could die. That is why the Strait of Gibraltar is the main point of
concentration of migration for this species from Western Europe. They begin the postnuptial
migration between mid-July and early August, and can last until early October, although most of the
specimens have already reached their winter destination at the end of August. But this behaviour is
changing and it is necessary to take records of where the birds are on each date to document how
climate change makes the behaviour of the birds vary.
If the information indicates that the populations of migratory species are decreasing, it could
be due to climate change or other changes that humans are making (transformation of ecosystems,
crops with more machinery, insecticides, etc.).
The current situation indicates, by itself, that the main impact that climate change is having on
Andalusia is the worrying lack of water.
In Andalusia, there is another national park that, perhaps, can also be considered a true
beacon to observe how the climate emergency affects biodiversity. The fauna and flora of the Sierra Nevada -the southernmost high mountain in all of Europe- increasingly have to ascend more to find an ideal habitat. Ascent that, of course, has a physical limit.
The changes caused by climate change in birds (aclima).
Effects of climate change on birds, published by the Rey Juan Carlos University and
the State Meteorological Agency.
Recently the Spanish Congress of Ornithology was held, organized by SEO / BirdLife, and it
exposed the latest data that are handled on the alterations in the migration of birds in their passage
through the peninsula. The scientist Raimundo Real gave a lecture, entitled Biogeographic
responses of birds to climate change in the Iberian Peninsula, in which he stated that both
prenuptial migration (from Africa to Europe) and postnuptial migration (from Europe to Africa) are
being affected, and that particularly more and more species are wintering in the peninsula.
Biological changes.
Morphological changes.
Changes in geographical distribution.

The General Directorate of Planning of the Ministry of the Environment of the Andalusian Government has launched the Environmental Climatology Information Subsystem (SICA).
The Andalusian Strategy against Climate Change.
The Andalusian Climate Action Plan (2021-2030).
The PAAC and its Programs.
The Emissions Mitigation Program for the Energy Transition aims to establish the strategies and
actions necessary to achieve the emission reduction objective, as well as the coordination,
monitoring and promotion of policies, plans and actions that contribute to this reduction and the
transition to a new energy model. It defines ten strategic areas in terms of mitigation.
The Adaptation Program seeks to guide and establish the programming of actions to adapt to
climate change of Andalusian society, the Andalusian business and productive fabric, the
Administration of Andalusian Government and local entities, according to an assessment of
assumable risks based on a common scenario.
The Communication and Participation Program aims to promote information, training and co-
responsibility actions for the active participation of society in the fight against climate change, and
to promote and encourage citizen participation in the development of policies in this area.
Within the framework of its functions and competences, the Andalusian Office of Climate
Change has set itself the following strategic objectives for the year 2022.