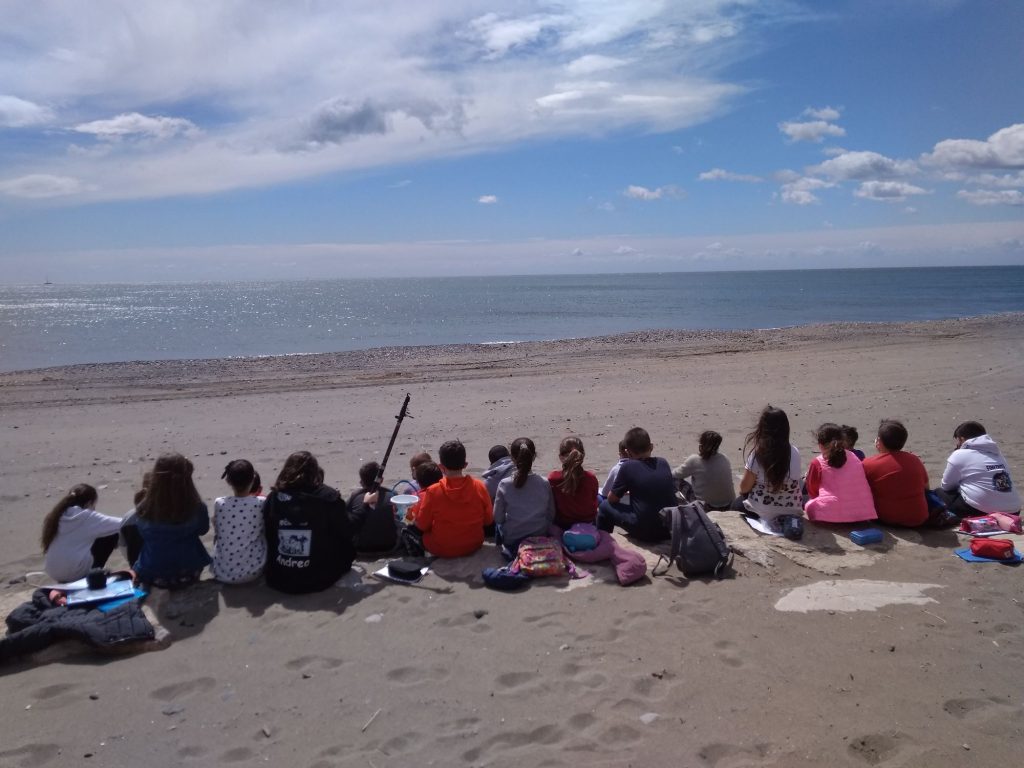 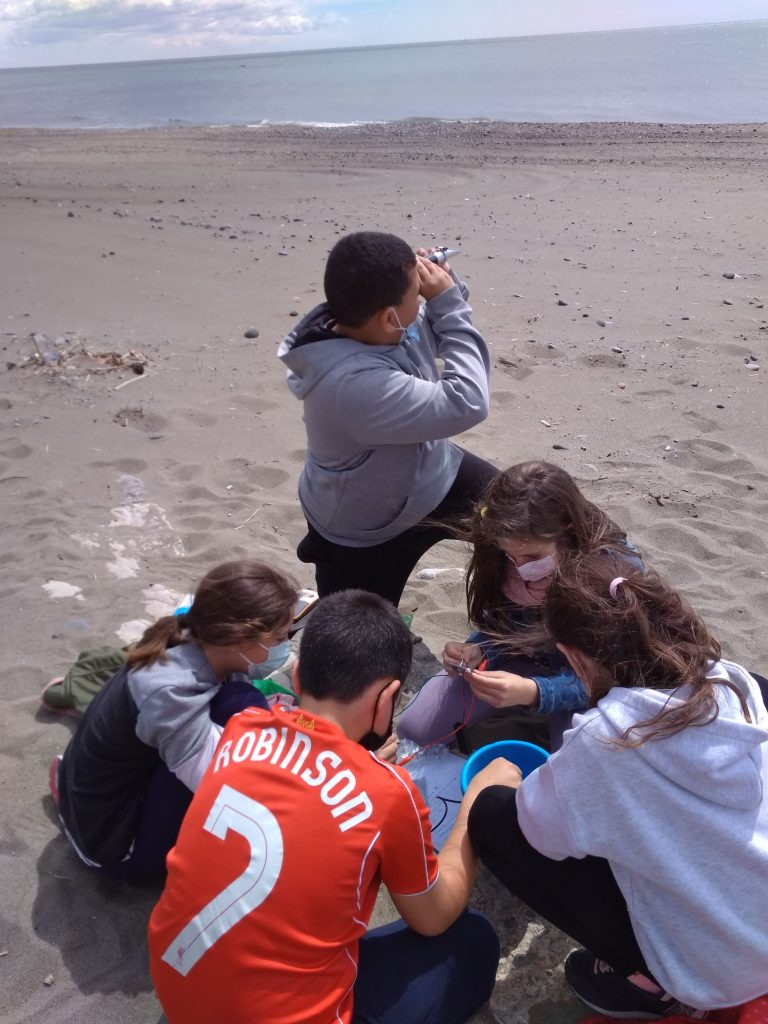 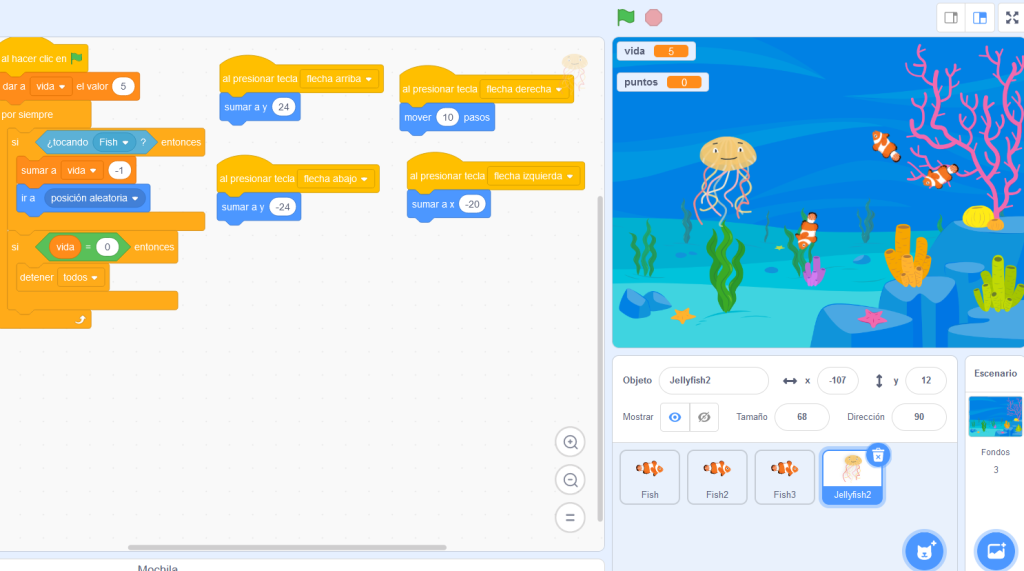 What is the relationship between the water conditions of our beach, the climate and the appearance of jellyfish plagues? How do these factors influence the ecosystem of our beach?

In recent years, large plagues of jellyfish are appearing every summer on the beaches of Estepona. We believe that the rise in temperature of the waters of the Mediterranean Sea as well as the level of salinity are factors that are influencing this phenomenon.
The data for our research comes from the measurements we have made once a week of the water temperature and salinity level of the water at La Rada beach, very close to our school, during the months of February, March and April and the data collected by the Spanish Institute of Oceanography in Málaga and others from the Copernicus satellite. We also intended to make observations of the physical conditions and living things (or remains of them) of it, but very early every day, the municipal beach maintenance service cleans the sand, so our observations are invalid.
Measurements have been made using Microbit card and submersible sensors. To do this, the students have programmed the device and previously checked the accuracy of both the sensor and the card by calibrating them with a submersible thermometer.
The students have carried out a study of the characteristics of jellyfish: feeding, morphology, types, curiosities… their relationships with other living things and physical factors as well as their importance within the ecosystem.

Oceans make life in our planet possible; they regulate the climate, produce a very important part of oxygen and are host 90% of Earth’s biodiversity. The Mediterranean, the Mare Nostrum, which bathes the coasts of Estepona, is also a crucial historical and cultural factor and a fundamental economic element. The sea is an element highly sensitive to climate change. We know that the Mediterranean shows a continuous warming trend since the 1980s, with its surface temperature increasing by approximately 1ºC every 28 years and 0.22ºC every century in the intermediate layers, and from 2000 onwards it has presented record surface temperature data. Our measurements of the surface temperature as well as those provided by the Spanish Institute of Oceanography endorse this trend.
The Mediterranean is a sea made up of many seas with particular characteristics. The area concerning us is the Alboran Sea, the westernmost, which begins in the Strait of Gibraltar where it communicates with the Atlantic Ocean. The Atlantic waters enter through the Strait of Gibraltar causing the surface water of the Alboran Sea to be of lower temperature and salinity than the more eastern waters, being, additionally, the coastal waters more saline than those of the high seas. The different salinity, temperature and density of the Atlantic and Mediterranean waters as well as the exchange of heat and water between the sea and the atmosphere forms eddies, fronts and filaments. Regarding the appearance of jellyfish on the beaches, experts affirm that the two great eddies or anticyclonic gyres of the Alboran Sea, formed by the water currents that enter from the Atlantic, trap the jellyfish, preventing them from reaching the coast. However, if these gyres are not well defined due to storms during the spring, the jellyfish would be left out of these currents and would appear on the coasts. This fact, together with the imbalance in the ecosystem due to the excessive fishing of species that compete for food with jellyfish, and the decreasing in predators, causes an increase in the jellyfish population and a greater probability of they appearing on the beaches after a stormy spring. For this summer of 2022 there are two added factors that may have an impact: the ash in the sea after the fires in Sierra Bermeja and the haze, which causes a supply of nutrients that can be used in photosynthesis by producers, increasing food for jellyfish.

Jellyfish have a very bad reputation. They are annoying because they cause injuries due to the toxic substances of their tentacles, so care must be taken when bathing if there is a warning that they are approaching the coast; it is difficult to swim calmly if they come close to the beach. On some occasions, if they arrive in large numbers, they cause a ban on bathing so, in general, we can say that nobody likes them and it is normal for boys and girls to amuse themselves playing with taking them out of the water and piling them up in the sand. One of the conclusions of this work is the need to spread the message of respect towards these living things even if they are annoying to us. Although we do not like jellyfish, they are in their habitat and it is us, the people, who are invading their natural environment as well as altering its physical conditions. We have made informative murals and Scratch programs reporting on relevant aspects of jellyfish: types, characteristics, parts and curiosities as well as a game with a jellyfish as the protagonist. We hope to spread the message about the importance of our sea, the need for its conservation and respect for marine life, including jellyfish.