Project title: How does the sea turn against us? 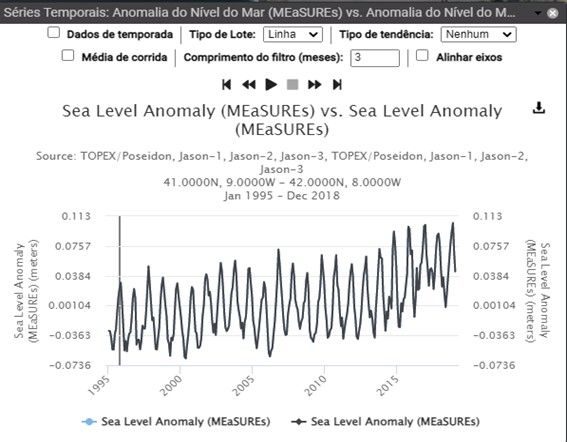 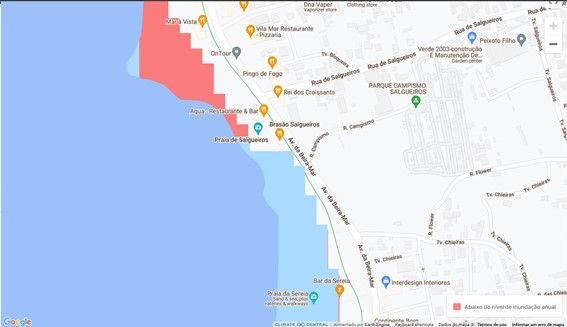 Can the sea level rise affect us locally?

The small city of Canidelo is situated in a coastal area, e several houses and infrastructures are placed there too. We want to predict how far would the sea level rise and how it will affect people’s daily lives. We are conscious that the sea level is rising due to the melting glaciers. This melting is related to the Earth’s mean temperature increase caused by the increase of greenhouse effect All of this is a consequence of pollution.

Data collected from satellites
We used the NASA Sea Level Portal to obtain information on the average sea level in the Salgueiros beach region. We used the website to observe the average beach water levels (figure 1) from January 1995 to December 2019.
Analysis of figure 2: There was a variation in the water level between 1995 and 2019, an average increase of approximately 0.07 meters. Just between 2015 and 2019, it increased approximately 0.04 meters, more than half of the total value.
The values presented here are average values, which means that, throughout the year, and throughout a day, there will be periods of time when the sea will be higher (high tides and spring tides) affecting the daily life of the population.
Through the website of Climate Central we can know which areas will be affected by sea level rise in 2050 if it continues to rise with the same trend.
From figure 3 it can be seen that the northern part of the beach will be practically flooded while the southern part will be less affected.

We have also performed some interviews to some local residents and workers to assess people’s perception.

Conclusions
Greenhouse gases are responsible for the temperature increase on Earth and affect the average sea level in 3 processes:
1. Thermal expansion: when the water heats up, the water particles move away from each other, taking up more space.
2. Melting glaciers: the ice on top of mountains melts a little every year, especially in summer. This is due to the increase in temperature that is a result of greenhouse gases.
3. Loss of the Greenland and Antarctic ice sheets due to ice melt.
The conclusion we draw is that some people are concerned and aware of the rise in the average level of seawater. This event has been worrying people and can affect their daily lives if the water level keeps rising as it has been. Some coastal areas may cease to exist.
As sea level rises, commerce, housing and other infrastructure, such as leisure, will be damaged or impaired, and may even cease to exist. When sea level rises at this rapid rate, a slight rise can have devastating effects on coastal habitats further inland, where it can lead to destructive erosion, flooding of wetlands, salt contamination of aquifers and agricultural soil, loss of habitat for fish, birds and plants.

We can conclude that if we don’t act, nothing will change and our planet will continue to suffer as it has suffered in recent times. We all have to cooperate!
We should avoid any actions that contribute to the temperature rising, such as pollution, using fossil fuels, and energy waste.
We can also share our results with people around us so that they are aware of the consequences of their actions.