Project title: What happened to our beaches? 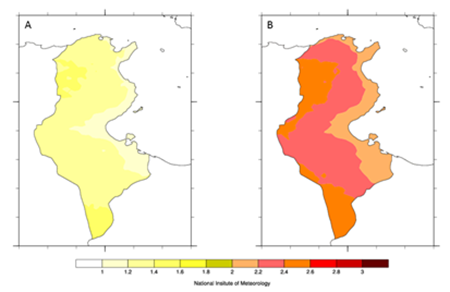 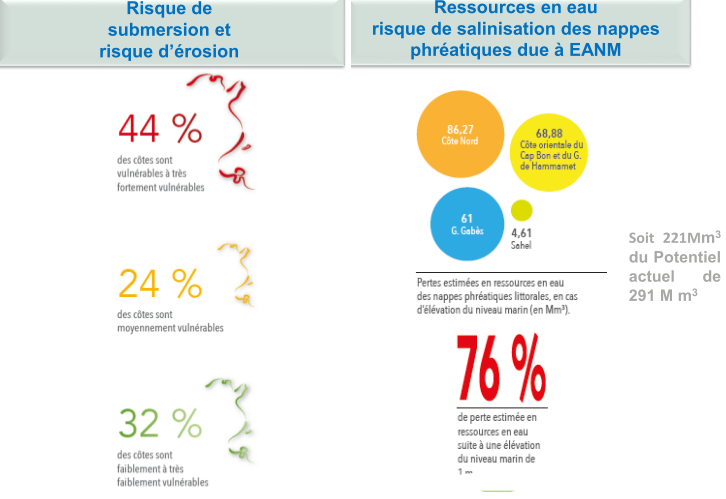 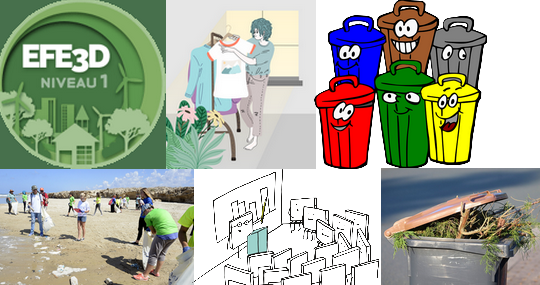 What is the impact of global warming and rising waters on the coastline in Tunisia, especially in the region of Sousse and Monastir ?

Tunisia will be the most affected African country by global warming:
– temperature increase: +1.9°C in 2050, +3.9°C in2100
– increase in sea level: +1.1° in 2050, +3.1° in 2100
– decrease in annual precipitation: -9% in 2050, -18% in 2100), rarefaction, salinization and acidification of surface and ground water,
– with an ENM of one meter, 116,000 ha of potentially submersible land, retreat of coastlines and beaches of 20 to 135 cm (Source: APAL)
The population and nature suffer from both the scarcity of natural resources, and the worsening of climatic phenomena: drought, floods, hail, sandstorms, landslides, erosion, loss of biodiversity, invasion by harmful species, all this endanger the survival of species and the food autonomy of the country.
We therefore studied the effects of global warming and rising sea levels on the coastline through 3 main themes:
– coastal erosion
– the submergence of the land
– the consequences on the water table
then we evaluated the consequences on the population of Sousse
We have done research on the web, analyzed satellite images, official statistics (INM, WWF, ministries of environment, IPCC, CDN updated Tunisia …) and satellite images (EO browser). We went to places where erosion is important and we met with officials of a company that conducts work to protect the coastline.
Our school has applied for the EFE3D label and many actions have been planned. We took part in all these events and also created a website, a phone application, an interactive game and escape game as well as sensitization posters.

The erosion of the coastline can be due to the rise of water, violent winter storms, the attack of swells but also to the houses and facilities built along the sea. The consequences are the destruction of buildings, the salinization of groundwater, but also the reduction of cultivable areas and fishing resources. The Apal is the organization responsible for protecting the coastline in Tunisia.
In Kantaoui, the problems of erosion are directly linked to the construction of the port dykes. Groin systems and rip-rap have been installed in the south of El Kantaoui saving all the houses and hotels on the seafront but aggravating erosion downstream.
In Monastir the coastline has changed from a rural and agricultural area to a highly urbanized tourist area. Since the 1980s and in 2016, maritime works have been set up to cope with coastal erosion and marine currents. But these works have had, here too, a detrimental effect, disrupting the transport of sediment and water supply to the beaches, emphasising the erosion of certain areas.
A consequence of rising water is the salinization of the water table and therefore the soil. Tunisia has more than 400,000 ha of irrigated areas of which 25% are affected by salinization, particularly in the region of Sousse. The overexploitation of groundwater gradually increases the salinity of irrigation water lowering crop yields and may deteriorate the land irreparably.
The consequences of coastal erosion on the population of Sousse are mainly economic: tourism is strongly impacted as well as fishing and agriculture which resources are decreasing. With a constantly increasing population due to the rural exodus, the unemployment rate reaches 20% and even 40% among the under 25 years.

We then conducted a survey among all the students of the college on their lifestyles and consumption patterns to be able to target the axes of our awareness actions. Classroom interventions, with posters, a ¨Power Point presentation on cyber pollution and videos have already taken place.
Then we organized clothing collection days for an orphanage and a beach clean-up day.
It was too late to sign up in the Cyber World CleanUp Day on March 19, but we will raise awareness of electronic pollution among our classmates and organize a digital cleanup and electronic recovery day.
A website, a phone application, an escape game and an interactive game have also been created in order to reach as many people as possible through more entertaining means.
We are aware that these actions remain limited at our scale. While Tunisia is a country with very low carbon emissions (- 0.07% of global emissions), the country has committed itself to reducing it by 45% by 2030. The industrialized countries responsible for global warming must help it towards adaptation to the world of tomorrow.