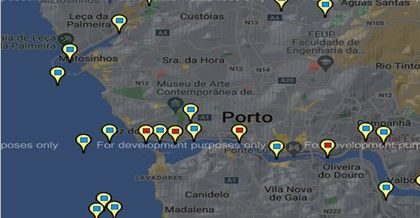 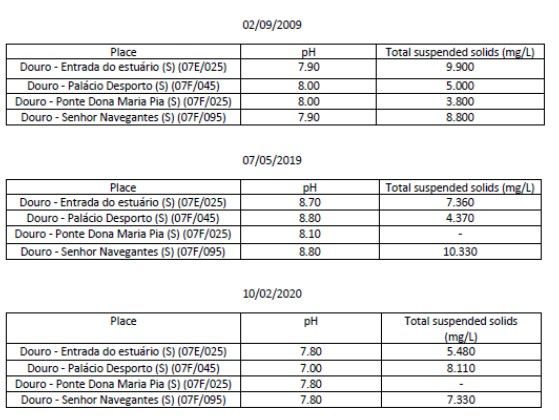 How much is Afurada’s marina polluted?

Douro river is very polluted. Some pollutants come from fossil fuels, open sewers, and human action. Human action can be the use of cargo boats which can, in return, cause accidental spills to the river. Open sewers affect both human daily lives, as human health, and sports practice. If people swim close by or even in the marina, and it is polluted, we can also point some skin diseases and sight problems as consequences of the water pollution. Relating to sports, aquatic sports, such as swimming and canoeing, are deeply affected by water pollution. Finally, we can pinpoint water pollution as responsible for animals’ disease and eventually the death of marine animals.

Data collected from professional sources
We have taken information regarding pH and amount of suspended solids from four different locations along the Douro River from the SNIRH website (points chosen in figure 1).
Through analysis of the tables, it was found that the pH, over the years, remained between 7.80 and 8.80. In relation to total suspended solids, the place with the highest value was Senhor dos Navegantes in 2019.

Conclusions
The main parameters used to classify water quality were pH and Total suspended solids, as there was no more information regarding other parameters. The pH can indicate the existence of some type of contamination, chemical or biological. According to Decree-Law no. 236/1998 (Portugal), the pH should be between 6 and 9. Total suspended solids are related to organic and inorganic substances dissolved in water.
The pH values collected are between the average values since the solids suspended in the water vary according to the years, which may or not indicate water pollution. It would be necessary to have more data regarding each place at each time to be able to say, with certainty, if there was or not pollution.
The residues highlighted here were not taken from any website but are the result of observations made with the naked eye on the banks of the Douro River, in Marina da Afurada and Afurada.

Water bottle (plastic) – This residue is caused by human beings.
Cotton swabs – This residue is caused by human beings.
Straws (plastic) – This residue comes from restaurants on the riverbank (most likely), such as those in the marina of Afurada.
Balloons – Birthday parties made for children on the banks of the river.
Masks – This residue comes from uncivilized people who, instead of putting the mask in the right place, throw them to the ground, causing them to end up in the Douro River.
The impact of these residues on biodiversity and on human life are diseases both in marine animals and in humans who use the river both for fun or to practice sport, but also the deaths caused by the consequences of these residues.

1 – We shouldn’t throw garbage at the sea or to the floor because it may end up in the sea.
2 – We can also organize or join a cleaning session at the Afurada or at other locations where there is pollution.
3 – Talk to our family members and friends to let them know what the consequences of pollution for us and for the environment are.