Project title: IMPACT OF GLOBAL WARMING ON THE POPULATION OF SOUSSE 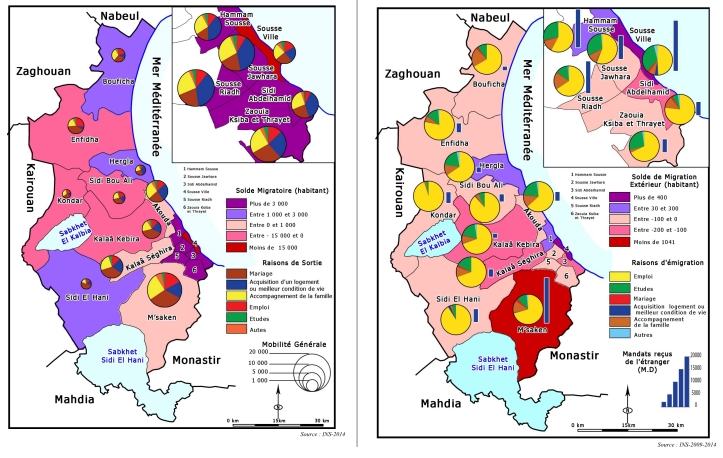 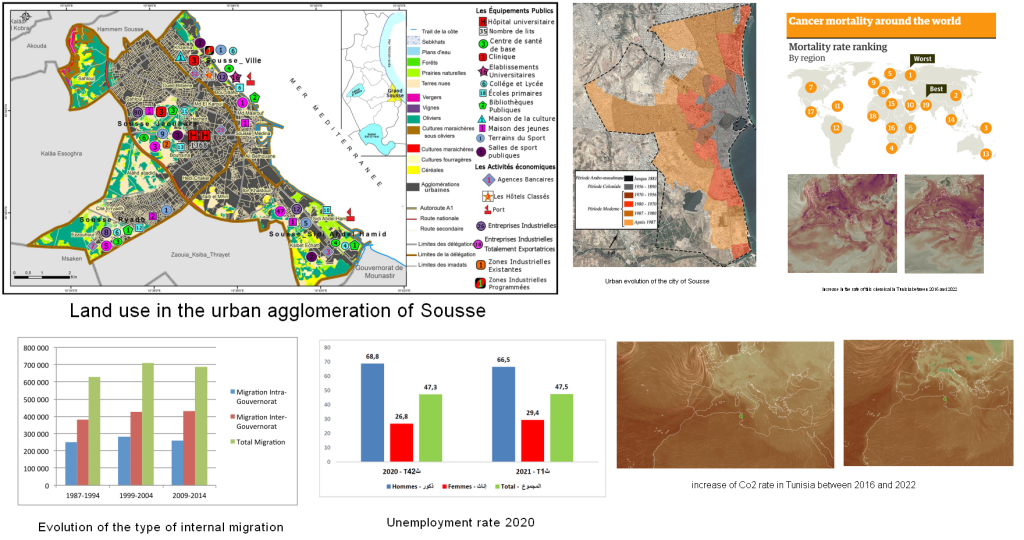 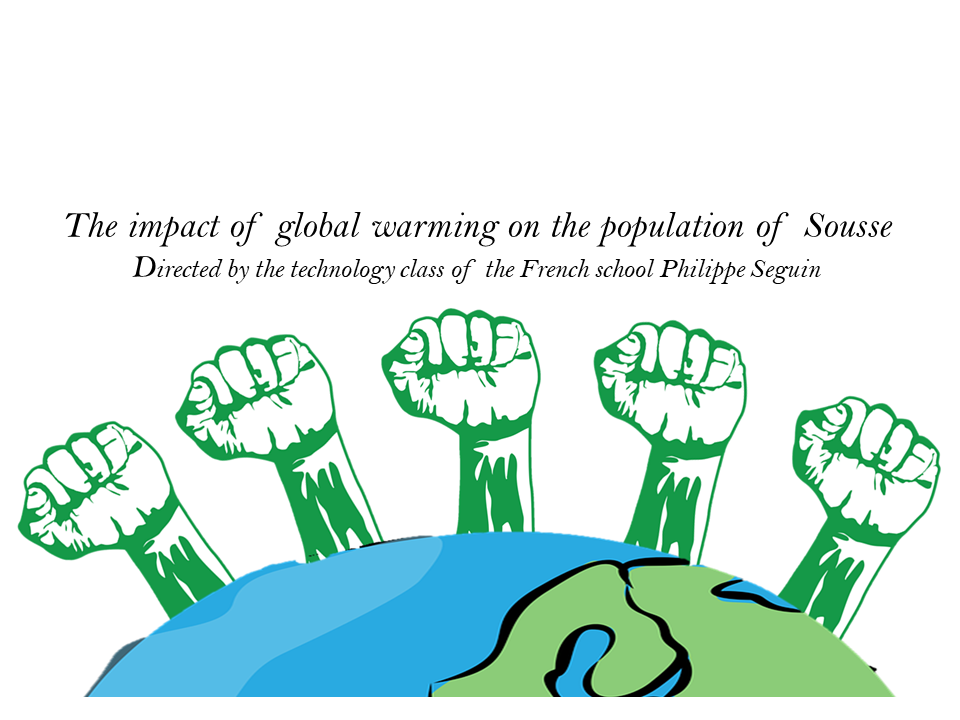 How does global warming jeopardize the quality of life, jobs or health of our city’s residents ?

Tunisia will be the African country most impacted by global warming: the temperature could increase by 2 ° by 2050 and that of the sea of 0.8 ° per year, the sea level could also rise 5 to 10 m submerging many farmlands.
According to the UN, the Tunisian population could reach 13 million 476 thousand people in 2050.
Currently about 32,200 people, or 27.5% of Tunisians are in a situation of severe vulnerability, the majority of whom are women, and these figures will only increase.

In Sousse the three main sectors of activity are agriculture, fishing and tourism.

After having analyzed demographic statistics and unemployment rates (source), studied the evolution of the cultivable areas of the region by means of satellite images and that of the fishing resources of the region, interviewed a person in a precarious situation and an epidemiologist, we were able to note that not only these three sectors as well as that of health are already impacted by global warming but that the years to come are likely to be very difficult for our small country and its inhabitants.

Tunisia is a water-poor country, with a renewable water availability per capita of 486 m3, well below the world average of 1200 m3 per capita and 500 m3 recommended by the UN. The risk of shortage is now alarming because of the misuse of water, drought and salinization of groundwater. Agriculture in Tunisia is therefore strongly impacted by global warming causing a significant rural exodus to large cities such as Sousse which can not offer favorable conditions and work to all.
The unemployment rate increases every year, it was on average about 20% at the end of 2021, the youth being the most affected with a rate reaching 40%.
The tourism sector is also very affected because it is on beach tourism and the exploitation of sandy beaches that the economy of Sousse is based. It directly employs more than 20,000 people. The Ministry of the Environment estimates that 40% of beaches and low-lying coasts are vulnerable. The retreat of the shoreline already recorded has been estimated between 0.5 to 1.5m / year. The tourism sector is evolving from mass tourism to a sustainable tourism adapted to climate change and less polluting.
Fishing and aquaculture are sectors on which more than 50,000 people in Sousse depend. The increase in sea temperature is already having an impact on fish populations, with some species having disappeared, replaced by invasive species such as the daesch crab and jellyfish.
Finally, because of climate change, the number of cancers is increasing, drought leads to famine and dehydration and floods cause enteric diseases such as cholera. Due to the precariousness of the situation, a large part of the population cannot afford to take care of themselves.

We then conducted a survey among all the students of the college on their lifestyles and consumption patterns to be able to target the axes of our awareness actions. Classroom interventions, with posters, a ¨Power Point presentation on cyber pollution and videos have already taken place.
Then we organized clothing collection days for an orphanage and a beach clean-up day.
It was too late to participate in the Cyber World CleanUp Day on March 19, but we will raise awareness of electronic pollution among our classmates and organize a digital cleanup and electronic recovery day.
A website, a phone application, an escape game and an interactive game have also been created in order to reach as many people as possible through more entertaining means.
We are aware that these actions remain limited at our scale. While Tunisia is a country with very low carbon emissions (- 0.07% of global emissions), the country has committed to reducing it by 45% by 2030. The industrialized countries responsible for global warming must help it towards this adaptation to the world of tomorrow.