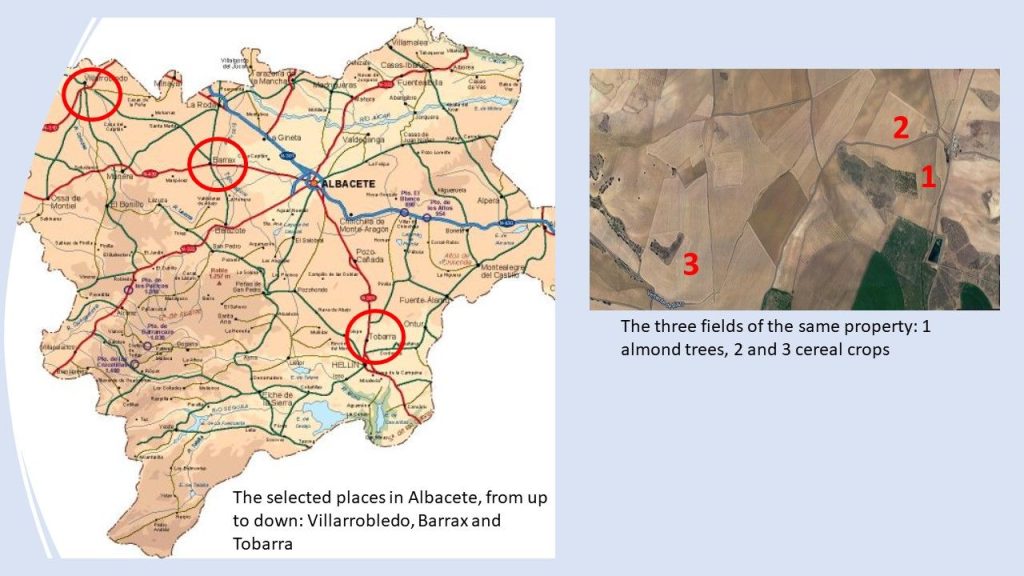 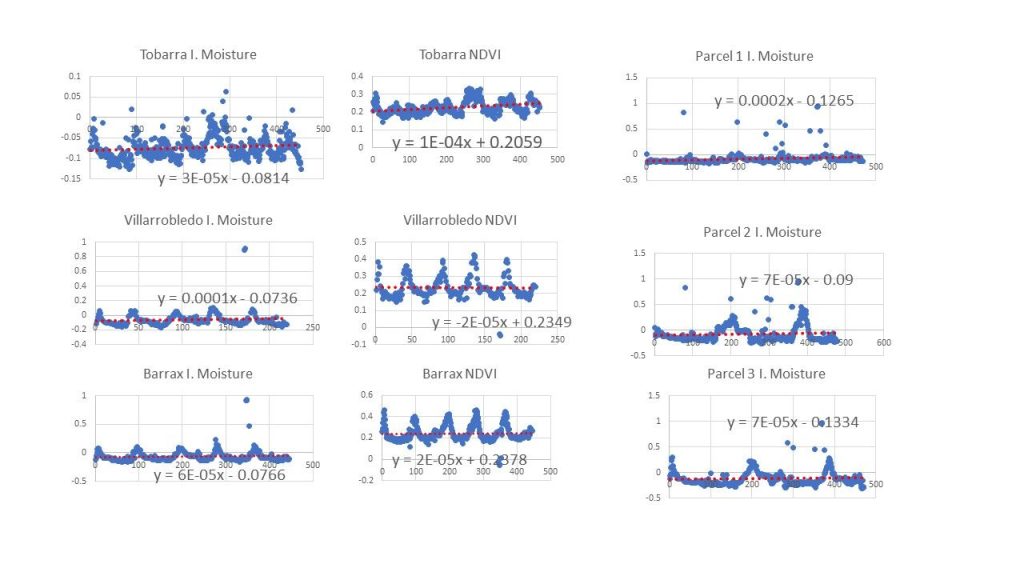 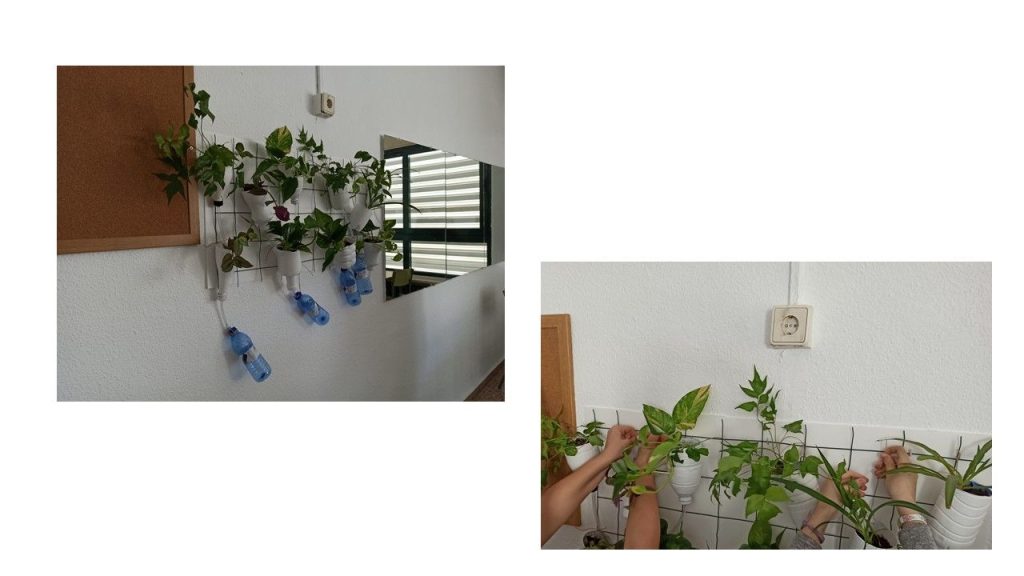 Could be vegetation an efficient tool to fight Climate Change?

Our region is placed in the South-East of Spain, one of the most affected areas by the Climate Change according to the Spanish Meteorology Agency (AEMET) forecasts, with dramatic effects on soil and vegetation.
In the last ten years, crops substitution has been implemented and many cereal fields have turned into almond tree lands, increasing their area from 411.587 to 625.421 ha.
Our aim has been to research if this increasing in almond tree lands has any observable effect and if it may be useful to fight the Climate Change, due the property of vegetation to trap CO2 and keep the soil moisture.
We have selected three different locations in our region, Villarrobledo, Tobarra and Barrax. The first of them is a place of cereal crops and vineyards. The second one is where more almond trees have been planted in the last years, and Barrax is a traditional place of cereal crops which are being substituted by almond trees.
The climatic data have been acquired from AEMET and the Sentinel 2 satellite images from EO Browser.
For all the locations we have got the NDVI data of the last five years as well as the Index of Moisture of the same period. To analyze their evolution in time, we have plotted them and calculate their trend line using Microsoft Excel.
Finally, the scientific expert suggested us to focus on smaller places. Thus, we selected three different fields in the same property. One with almond trees (1) and two with cereal crops (2 and 3)

We have concluded from the weather data that there have been only slight changes in average temperature and precipitation in the last four years.
NVDI and Moisture Index data of the places selected show seasonal variations, which are more significant in Barrax, where more cereal crops can be found.
The analysis of trend lines gives the following results.
Tobarra. The values of NDVI and Moisture vary periodically due to seasons, but there are only small differences between maximum and minimum values of both magnitudes.
The trend line of NDVI and Moisture Index shows a positive slope in despite of their seasonal variations. This increasing in their values cannot be explained by precipitation, as they have been almost the same during the time of the research, as we mentioned above.
Villarrobledo. The values of NDVI and Moisture vary with the same pattern than Tobarra, but the differences between maximum and minimum values are remarkably bigger. We think it is a consequence of the bigger extension of cereal crops in this area.
The trend line of NDVI shows a negative slope even though Index of Moisture tend to increase like in Tobarra.
Barrax. The pattern of variation of NDVI and Moisture values are very similar to Tobarra´s.
NDVI and Moisture Index also show the same tendency as Tobarra.
The analysis of the tree parcels of the same property shows that two of them (2,3) are fallow fields, those used for cereal crops, which have maximum NDVI values in alternative years. The third one (1), planted with almond trees, shows a pattern very similar to Tobarra´s.
We have seen also a stronger tendency to increase of Moisture Index where almond trees have been planted.
Conclusions:
– The presence of almond trees favors the quality of vegetation (measured by NDVI).
– It also increases the Index of Moisture of the soil, even though precipitation don´t increase significantly.
– It is possible to distinguish between fallow fields and parcels with trees by seeing their pattern of variation of NDVI and Moisture in a period.
– For these reasons, we think that an increasing in vegetation, mainly trees, could be a useful tool to fight desertification as well as to fight Climate Change, because it helps to keep the moisture of soil.
We have used only satellite images and climatic data; thus, they should be tested with research on the ground, which unfortunately, we couldn´t do.

We have found in our research the benefits of vegetation to keep the moisture of the soil and its role as a tool to fight the Climate Change, thus we have started two actions:
– We want to get our project known by our community. Thus, we have made a video and uploaded it to social networks and to the web of our High School.
Instagram Link
https://www.instagram.com/tv/Ccq4cbdg9ak/?igshid=YmMyMTA2M2Y=
Twitter Link
https://twitter.com/iestnt/status/1517632211335454730?s=24
Web Link
https://iestnt.com/2022/04/4560/

– We are going to explain our project to our High School classmates and our families in a presentation scheduled for June.

– We are working with our classmates to make greener our high school, placing and keeping vertical gardens in our classrooms. We call this project “PINTA DE VERDE EL TNT” (Make greener TNT) As we can`t act on wider areas, we are focused on our closest environment.