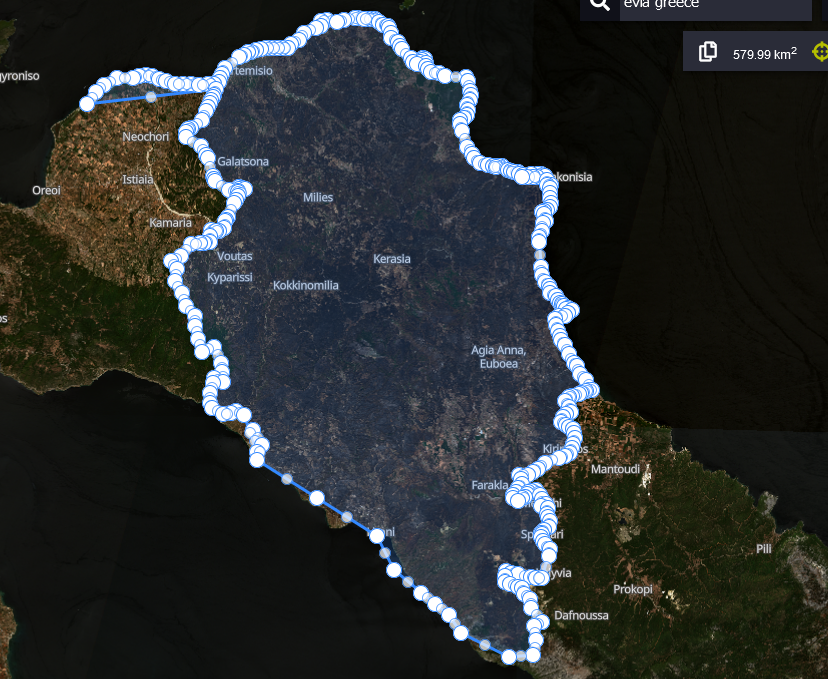 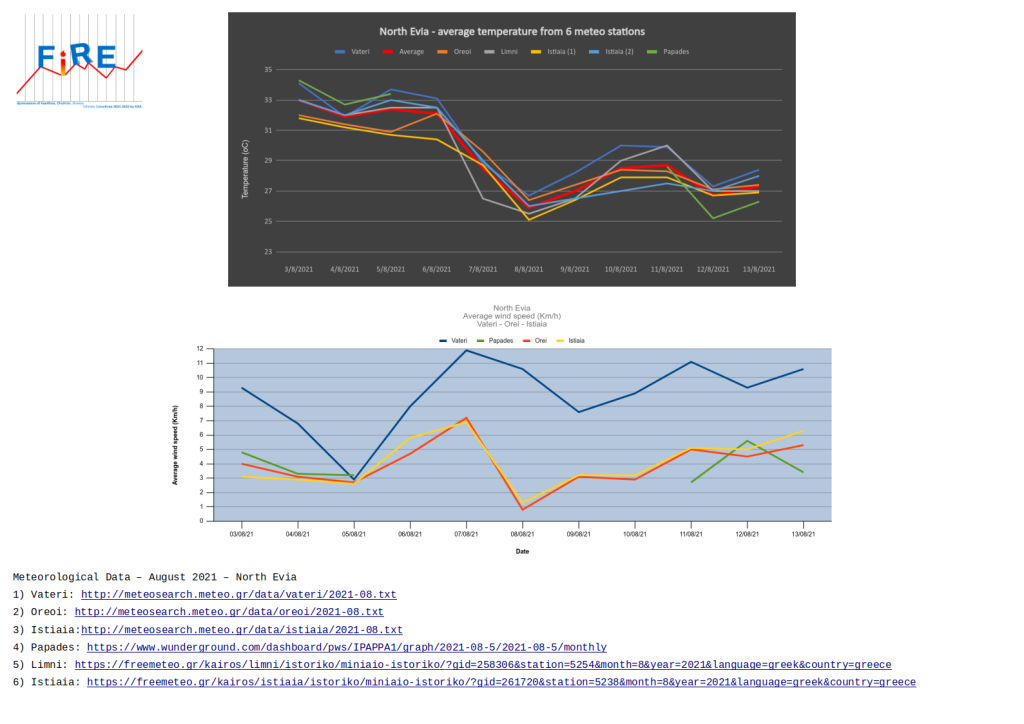 The climatic impact and consequences of extensive fires in the forestry area of Northern Evia in August 2021.

The issue we investigated is the massive fire that broke out in Northern Evia, Greece in August 2021 (3 – 13/8/2021). The team investigated the climate problems that were caused in the area in the aftermath of the fires by analysing collected data and subsequently looked into the extent of the fire in combination with the climatic conditions that prevailed during the fires.

The team investigated the great impact of the wildlife fires, not only on the climate, the flora and fauna and the environment as a whole, but also on the economic, social and cultural lives of local inhabitants in the long run, taking into account the fact that almost 507,950 acres were burned in the area of ​​Northern Evia during that period.

To this purpose the propagation pace and extent of the fire, in combination with the climatic conditions that prevailed during the propagation period were investigated.
The sources of data used were:
(a) the EO browser (Aug/Sept/Nov/Dec 2020, Aug/Sept/Nov/Dec 2021) in order to approximately calculate the burned area using SWIR visualization
(b) meteorological data (temperature, barometric pressure, humidity, relative humidity, air direction, air velocity, air dust/pollution, CO/CO2, NHX, SOX etc) of the area which was received before the fires broke out, during the fires and after the fires had been extinguished.

The main source of data was the EO browser. Satellite images concerning vegetation, CO2, atmospheric penetration etc. were retrieved and analysed. A time-lapse with the spread of fire and its CO2 emissions during the fire was also taken into consideration.
Data from nearby meteorological stations in the areas near the outbreak of the fire has been used and graphs depicting temperature, relative humidity, barometric pressure, air velocity and air direction have been produced. The most important of the aforementioned factors, which explain why the fire propagated as it did, are temperature and relative humidity.

Based on the data collected during our research the following conclusions have been reached at:
a. The erosion potential in Northern Evia is huge and is expected after the fire to supply millions of cubic meters of soil to the hydrographic network, i.e. rivers, which will result in radically changing the morphology of the area. In addition, the risk of landslides in Northern Evia is increasing dramatically and thus huge impacts are expected.
b. The toxicity of combustion residues in the area of Evia is medium because there is less extensive combustion of industrial facilities, cars and homes, compared to larger cities in other parts of the country.
c. The flood risk in Northern Evia is maximum, given the significant hydrographic network that develops in the fire-affected areas and is partially reduced to natural dams that operate along it, as well as the remote location of the settlements in the area. Because of this, a huge impact is expected in the nearby areas.
Thus Evia faces a huge problem in terms of ecosystem recovery, because 400,000 acres are estimated never to return to the previous state, as factors such as the intensity of the burn, the topography, the geological formations and the rapid erosion will not allow this. This area is rapidly moving towards desertification. On the contrary, the surrounding fire infiltration zone, covering an area of ​​approximately 200,000 acres, can recovern, if targeted small-scale interventions are applied.

To clearly and concisely explain our Climate Detectives project our team has prepared a slide presentation and an article to be used for communicating our team’s research course and results and for raising awareness in our school and local community in the area, since we wish our project to make a difference as far as environmental sustainability is considered.
The slide presentation has already been presented to a transnational student and teacher audience in April 2022, as part of an Erasmus+ programme our school is participating in.
We believe that it is of paramount importance to communicate the consequences created by the fires in Northern Evia were catastrophic.
In the event of such a fire no oxygen is produced and the atmosphere is polluted because dust and carbon dioxide levels are rising rapidly. Extreme temperatures prevail, which leads to heat waves in summer and extremely low temperatures in winter. There is a lack of rain, leading to detrimental floods. Animals are deprived of food and shelter, they consequently die and eventually species become extinct. Last but not least, the economic impact, as depicted in the scarce production of wood, edible fruit and resin, has proved detrimental for the area and its inhabitants.
We believe that the fire would have been reduced if more aerial firefighting equipment and vehicles had been sent. It could have been avoided if detected earlier and if fire zones had been created, or if controlled burning of an area had been applied.