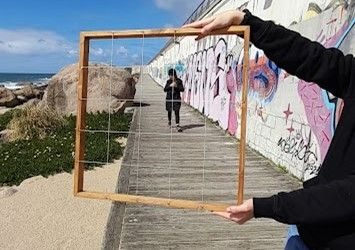 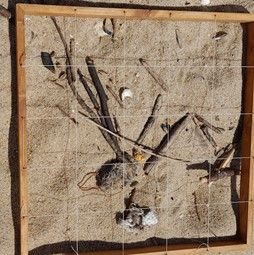 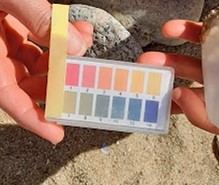 What are the residues, solid or others, that we can find more frequently in Canidelo and Madalena’s beaches?

Water pollution harms animals, people and plants. The pollution of water and beaches is a concern for the population of Canidelo and Madalena. There were several news reports of pollution and bacteria in the water, which means that there could exist microorganisms that cause diseases.

Data obtained in the field
Fieldwork was carried out at Lavadores beach, on March 31, from 2 pm to 3 pm, where samples of solid waste found on the sand was collected and the pH of the sea water was measured.
The strategy for solid waste collection was: in a sampling square measuring 0.5 meters on a side, that is, with an area of 0.25 square meters, existing waste was collected at four different locations on the beach. In total, one square meter of waste was collected (figure 1).
The main residues found were (figure 2 and 3):
– Plastic;
– Wood;
– Metal;
– Paper;
– Organic waste;
– Styrofoam;
– Cigarettes;
– Fishing yarn;
– Plastic strings;
– Disposable masks;
– Dog feces.
On the same day that the residues were collected, the pH was measured. The measured value was between 6 and 7 as indicated on figure 4.

Conclusions
Water quality is a set of physical, chemical and biological characteristics that it presents, according to its use. The most used classification standards aim to classify water according to its potability, the safety it presents for humans and the well-being of ecosystems.
We have found a lot of plastics and wood which are solid residues that are capable of suffocating, deforming and injuring animals that accidentally ingest or drag them. The garbage that is endlessly floating around in the sea has a great impact on animals that have done nothing to deserve the fate they end up having.
Marine litter can have different sizes and take hundreds of years to degrade. About 80% of waste comes from human actions, such as fishing, tourism, sanitation. Human beings are largely responsible for marine litter, but they can also change behaviors and choose responsible and sustainable solutions.
A plastic water bottle or a plastic bag takes approximately 100 years to decompose. A bottle cap sometimes takes 150 years to decompose. A sheet of paper takes between 3 and 6 months to decompose.