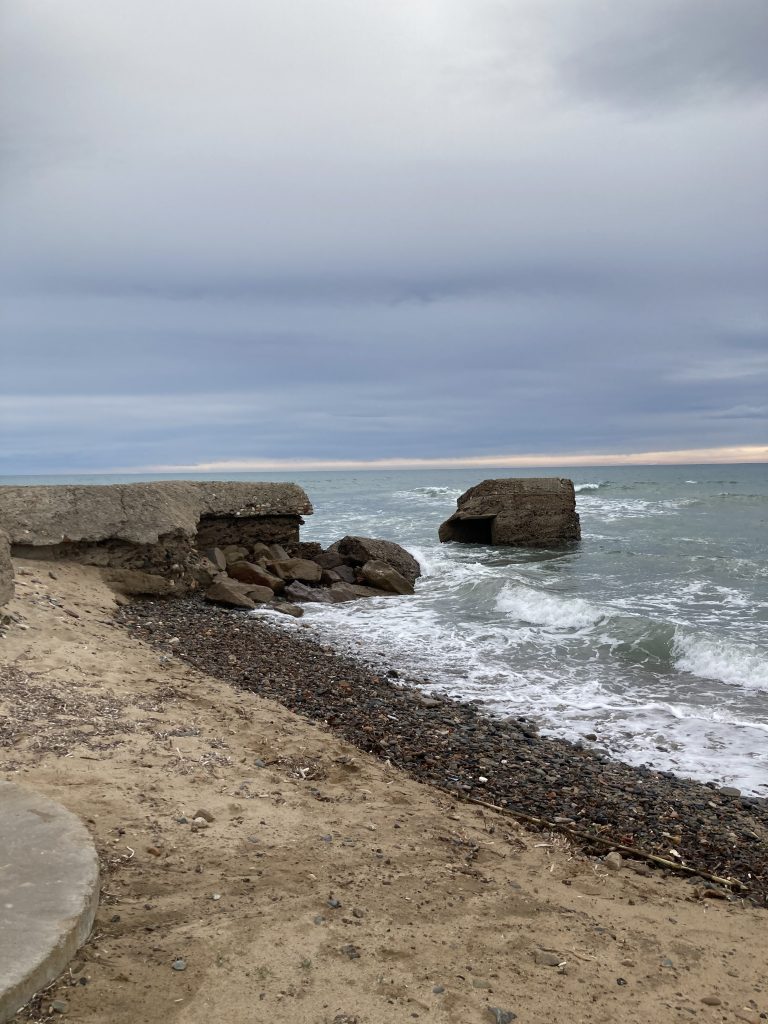 We wanted to know to what extent the sea level has raised in the past few years, as well as the consequences of a strong storm.

Our coastal area of Tarragona is part of the ‘Costa Daurada’, a part of Mediterranean cost that stands out for its beaches of fine sand as well as for its good weather, soft winters and warm summers, but also its human activity. It’s a densely populated area with a great tourist impact.
In this territory 2 serious problems coexist which affect the coast: human intervention and climate change. Human actions have modified the coastline, preventing the natural regeneration of the beaches by means of different constructions that avoid erosion. On the other hand, climate change has barely started to be felt in rising sea levels, which brings more frequent and destructive storms and extreme weather conditions. It’s also endangering urban areas that are closer to the coast.
We wanted to know to what extent the sea level has raised in the past few years, as well as the consequences of a strong storm. In the duration of this project, we travelled to different points, such as: Salou, Cambrils and Mont-roig del Camp to look at the state of our coasts, first-hand and with the eyes of a scientist. We have also found newspaper articles and scientific magazines.
To assess the effects of a storm, we have looked at the Gloria Storm, occurred between January 20 and 23, 2020. We consulted images of the Google Earth satellite. Furthermore, we have consulted aerial images from the Cartographic and Geologic Institute of Catalonia.
The comparison of the images before and after the Gloria Storm has allowed us to observe the damages caused. In particular, we have analyzed the changes in a specific point where a stone fortification was built during the Civil War which is now immersed in the water.

Our coast is highly urbanized. Due to climate change the level of the sea will rise and there will be more storms that will affect the life of the population and the coastal biodiversity.
The special report of the Intergovernmental Group of Climate Change of September 25, 2019 tells us that the rise of the sea level is unavoidable due to the melting of the Artic. If the level of the greenhouse gases continues, the level of the sea in the Catalan cosastline will have risen between 60 and 110cm by the year 2100. If such level were to decrease, the rise would be 20-60 cm. A 30 cm rise on a beach means that the sea will cover about 100 meters of land.
In the last 40 years the level of the Mediterranean Sea has risen 9 cm but it will get worse as the Artic melts, now it’s believed to be between 3-4mm every year. So, 9 cm means moving forward about 13 meters inland.
On the other hand, the storms in the coast will be more frequent. They are associated with intense rainfall and strong winds from the east . The data analyzed in the ‘Playa de la Pixerota’ in Mont-roig del Camp where there is a stone fortification that we have used as a guide to see the evolution of the beach indicate that with the Storm Gloria, in just three days, a good part of the beach of this area was eroded and affected the constructions.

In conclusion, we think that the problem of our coast is very serious because buildings and promenades are very close to the water. For many years this problem was not taken into account.
We have seen that governments have tried to mitigate the problem with new DIKES by adding sand to the beaches. E.g., when the summer arrives, they put sand on our beaches in order to regenerate the area and therefore, be able to welcome the tourists. Other harder constructions of big stones o cement also are used to slow down the advance of the water and reduce the impact of the waves.
But he solution of the experts is that the beaches should be allowed to recover naturally. The governments will have to find more effective long-term solutions, e.g., slowly let the sea take the area.
If Climate change causes the melting of the Artic, and therefore causes the sea level to rise, every action to mitigate the problem of the coast is good.
We are aware of this serious climate problem and we want our contribution to be able to inform and educate people.
We will publish our results on the social networks of our high school.