Project title: The Melting of the Greenlandic Inland’s Ice on Sea Level 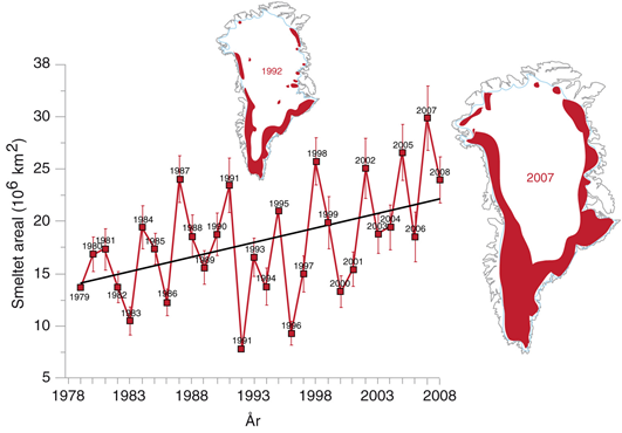 1. What happens when the ice sheet melts?

The differences between melting sea ice and Ice sheets (on Greenland) on Sea Level and forest fires:
The increased level of CO2 makes the greenhouse effect stronger and leads to rising temperatures on the ground. And this will lead to the temperature of our planet rising, and a natural result of this process is that the masses of ice in different parts of the world have begun to melt. If the temperature continues to rise, it will have consequences such as the sea being supplied with large amounts of fresh water, which will cause the sea level to rise. It is not only the melted ice that contributes to sea level rise, but also that hot water fills more than cold water.
And the UN Climate Panel believes that the world’s oceans will rise by 58.3 meters
A global sea level rise will have a major impact on the drinking water supply, in many places on earth. The seawater is salty, and the saltwater will in the areas near the coast penetrate into the land and pollute the groundwater. So, one may have to fetch fresh water further inland where the seawater has not penetrated.
Sea level rise will also have consequences for people living in low-lying areas, such as Bangladesh and the Netherlands, and a number of Pacific island communities such as Kiribati.

It will be observed that the ice cube in the freshwater melts faster than that in salt water. The difference
due to the fact that the salt slows down the melting, as salt water has a lower freezing point than fresh water.
one will be able to observe that the water from the ice cube settles on top of the salt water, whereas it
mixes up when melting in fresh water (Figure 4A).