Project title: Investigating Storms and how they affect the Local Environment. 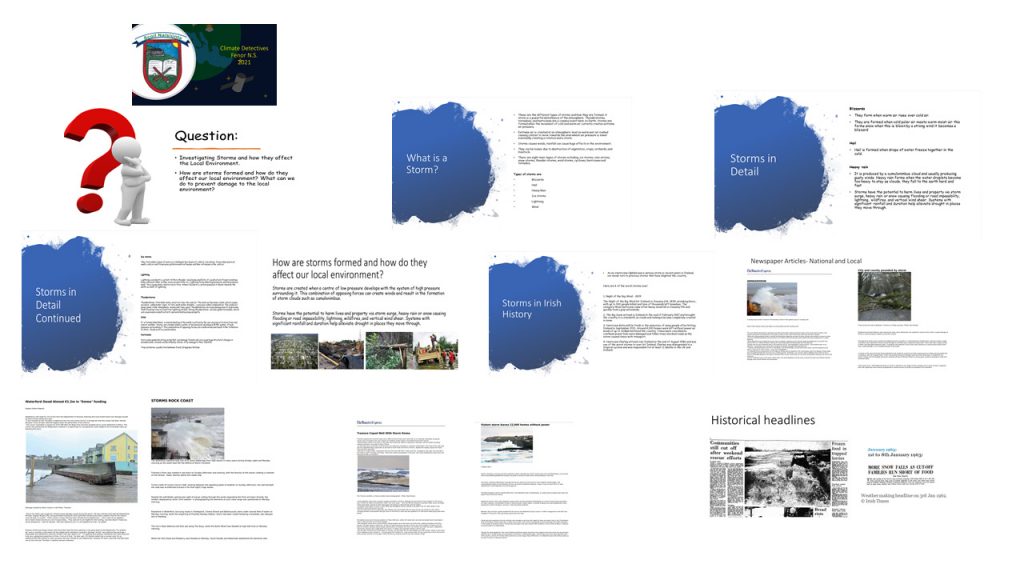 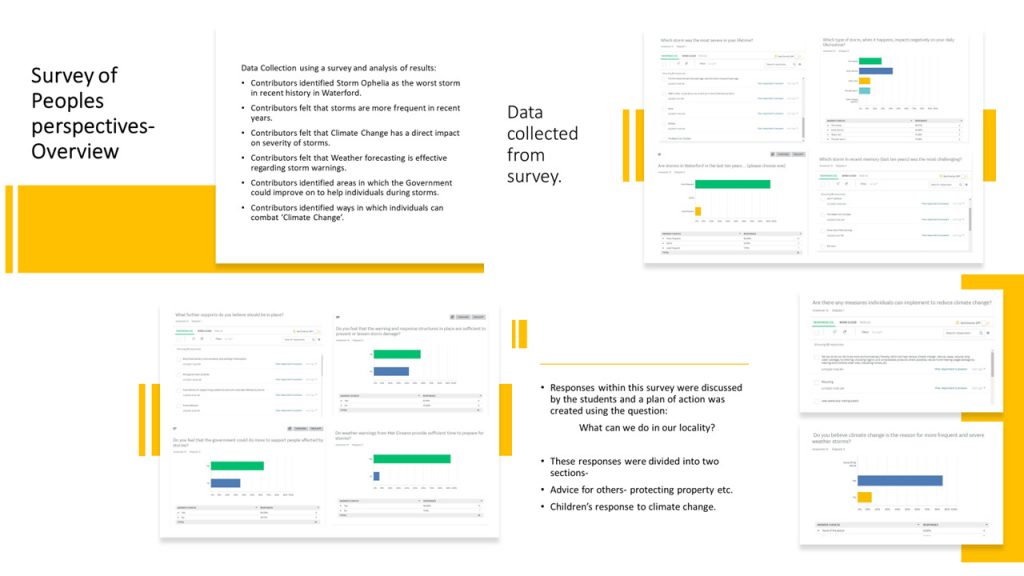 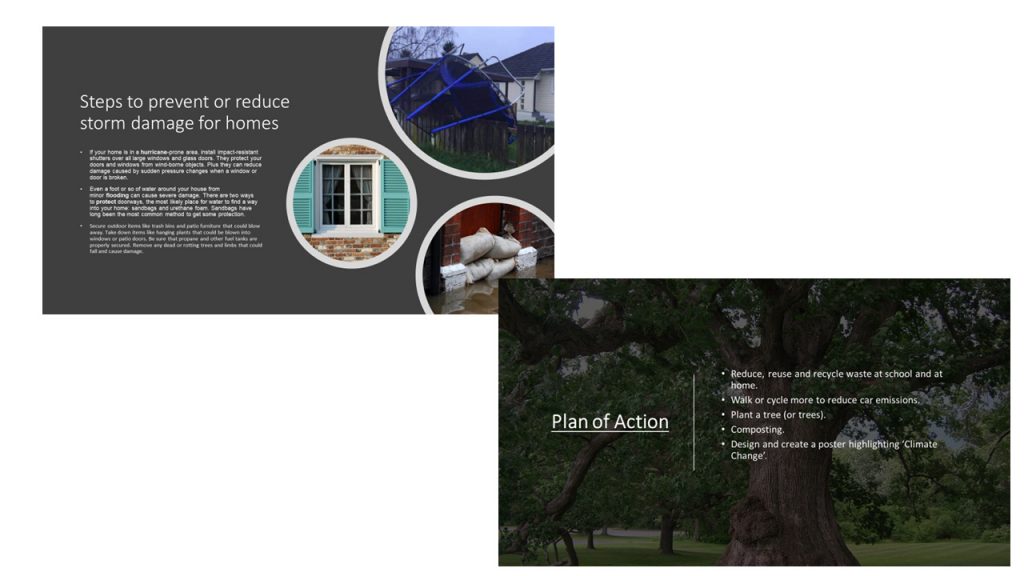 We have noticed in recent years that there appears to be more frequent and severe storms in Ireland. The storm warnings appear more severe and the damage caused to the local environment is apparent. The media shows us images of this damage and the fact that there are many closures of schools affect us too.
We want to investigate what storms are, where they come from and the possible causes of the severity and frequency of storms.
We plan to identify and implement simple measures that can be used to reduce the risk of damage to the local environment and help the climate in the long term.

Here is what we discovered:
Storms have the potential to harm lives and property via storm surge, heavy rain or snow causing flooding or road impassibility, lightning, wildfires, and vertical wind shear. Systems with significant rainfall and duration help alleviate drought in places they move through.

From gaining this information we explored some of the most severe storms in Irish history and identified four of them.

Here are 4 of the worst storms ever in Ireland:
1. Night of the Big Wind – 1839
The Night of the Big Wind hit Ireland on January 6th, 1839, wreaking havoc, with up to 300 people killed and tens of thousands left homeless. The category three hurricane came after heavy snowfall on January 5th and quickly took a grip nationwide.
2. The Big Snow arrived in Ireland at the end of February 1947 and brought the country to a standstill, as roads and railways became completely covered in snow.
3. Hurricane Katia hit Ireland in September 2011. Around 4,000 homes were left without power as winds of up to 110kph battered the country. Trains were cancelled as overhead power lines were damaged and fallen trees blocked roads as the storm caused chaos with transport.
4. Hurricane Charley arrived over Ireland at the end of August 1986 and was one of the worst storms to ever hit Ireland. Charley was later downgraded to a tropical storm.
Media coverage from newspaper articles, both local and national gave us an insight into the devastation caused by storms on a local and national scale.
We found these articles from the Munster Express, Irish Independent and Irish times.

Next, we created some projects based on storms- one of which is found in the presentation.
We also conducted an experiment at home called ‘Rain cloud in a jar’ which demonstrated how clouds cause rain to fall. Depending on temperatures in the atmosphere, this precipitation can fall as rain, hail, sleet or snow.

We conducted a survey of adults attitudes towards storms and their impact on their lives. We asked whether they felt they were appropriately informed with weather warnings and if the government does enough to aid those impacted by storms.
The findings noted that people felt that snow storms impacted their daily lives most.
They felt that weather warnings were conducted well.
They also felt that the government could do more to help those affected by storms, for example, more financial aid.

Adults were also asked if they felt storms were more prevalent in recent years.
Do they feel that climate change has had an impact on the severity of storms?
Is there anything we can do to combat climate change?

The finding show that adults felt that storms are more prevalent in recent times.
They indicated that climate change has a significant impact on the severity of storms.
They noted that by planting more trees, reducing waste and emissions can have a positive impact on climate change.

It is interesting to note that while we talked to a science expert, he indicated that storms are not more prevalent but have become more severe.
Adults also noted that storm Ophelia was the most severe storm in recent years.

Using the ESERO satellite website we tracked the progress of storm Ophelia over Waterford.

In conclusion we identified ways in which adults can reduce the effects of storm damage by:
• installing impact-resistant shutters over all large windows and glass doors. They protect your doors and windows from wind-borne objects. They can reduce damage caused by sudden pressure changes when a window or door is broken.
• Minor flooding can cause severe damage. There are two ways to protect doorways, the most likely place for water to find a way into your home using sandbags and urethane foam.
• Secure outdoor items like trash bins and patio furniture that could blow away. Take down items like hanging plants that could be blown into windows or patio doors.
• Remove any dead or rotting trees and limbs that could fall and cause damage.

Some of the actions which we have undertaken or plan to undertake are:
• Reduce, reuse and recycle waste at school and at home.
• Walk or cycle more to reduce car emissions.
• Plant a tree (or trees).
• Composting.
• Design and create a poster highlighting ‘Climate Change’.